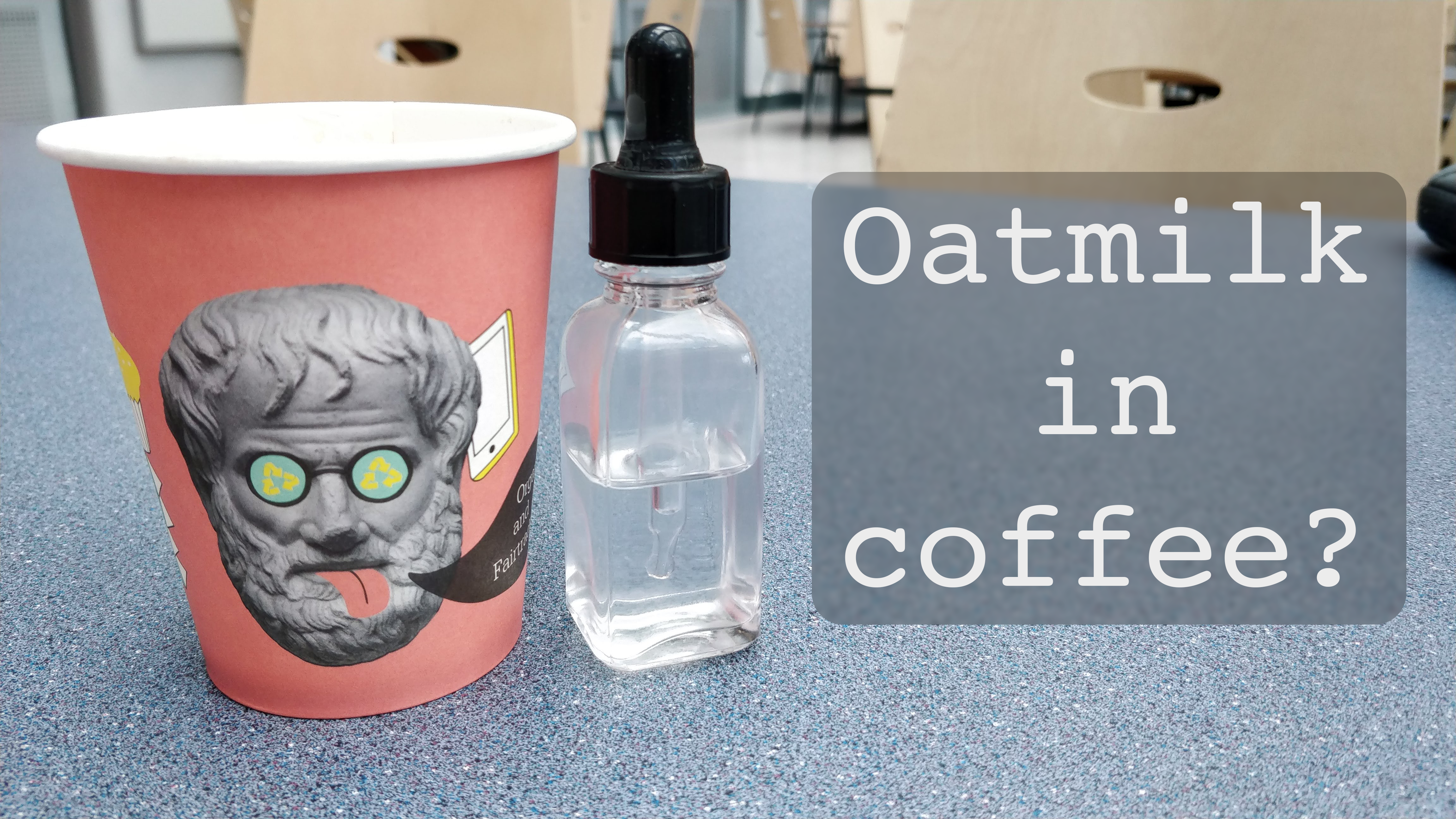 TL;DR: Is your plant based milk coagulating/curdling when you poor it into your coffee? Add a couple of milliliters of sodium hydroxide (NaOH) solution to it before pouring in the milk. Also make sure that the coffee isn’t too hot.

Coffee is a big part of Swedish culture and Sweden is ranked as the #6 per capita coffee consumer in the world1. Some coffee purists will hate this, but I like to drink my coffee with milk. Oat milk to be precise, as it is one way for me to reduce my carbon footprint. 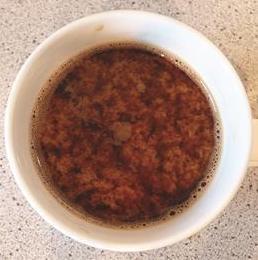 Oat milk doesn’t always play nicely with coffee, and sometimes it curdles as shown in the image below. Not only does it look horrible, it doesn’t taste nice either. One of the reason behind this is that coffee is relatively sour with a pH slightly below 52, which causes the proteins in the milk to denature, meaning that they unfold or change shape.3 The denatured proteins can then tangle together, similar to how cables in a drawer always ends up in a twisted mess. Another factor that can cause denaturation, is temperature. 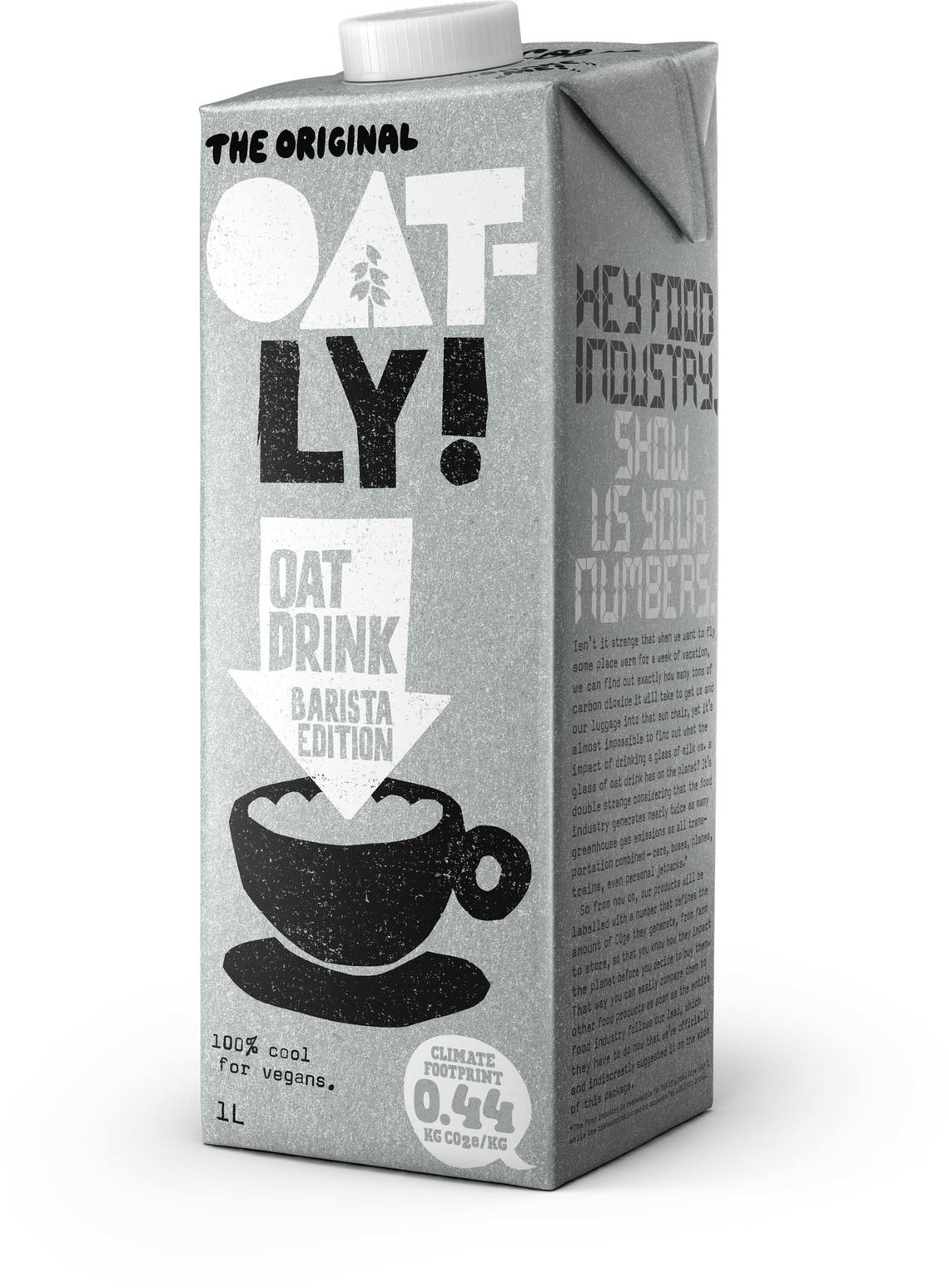 Curdling usually doesn’t happen when we add cow milk to coffee because cow milk naturally contains phosphates, which acts as a buffer to sudden drops in pH.4 This is also one of the reason people like milk in their coffee, because it reduces the acidity, giving it a rounder taste. Plant based milks however, don’t have this feature, and it must be added in the form of dipotassium phosphate.

Now to the reason why I made this post in the first place. Here in Sweden, we have the Oat milk brand Oatly5 which makes a special “Barista edition” which is made specifically for the use in coffee. (Fun fact: “Barista edition” is called “iKaffe” here in Sweden. Which I guess plays with the Apple naming scheme, but also because “i kaffe” (with space) means “in coffee”.) I have used Oatly iKaffe for a long time and have never had any problems with it, until recently. Lately I have been sitting at the university campus, working on my thesis, and the coffee there is really acidic and strong (Maybe to keep all the researchers going? 😁). And every time it caused my milk to coagulate.

I didn’t have any extra dipotassium phosphate at home, but I did however have sodium hydroxide! It’s not as odd as it sounds, as it is sold as drain cleaner. And with that said, a word of warning: Sodium hydroxide is extremely basic. Stay safe.

So I prepared a small vial of NaOH solution which conveniently also has a dropper, for easy dispensing. I didn’t measure out an exact amount, but the solution is strong enough to make my skin feel soapy. (Don’t put it on your skin!). Now when I drink coffee at the university, I begin by adding six squirts of this solution before adding the oat milk, and it works great!